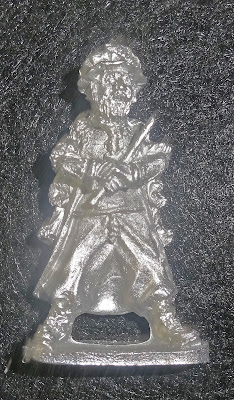 trip to my nearest show, which thanks to the offer of a lift took about 10 minutes rather than more than forty minutes by public transport, which I doubt I could have managed this year.
The figure on the right was a 'freebie' given to every punter at the door. OK, it's probably not a figure I'll find a use for, but nor will I sell or give it away ! The reason for retaining it is that on three separate occasions, friends that I met in the sports hall all said it bore a remarkable likeness to me ! (cheeky so-and-so's - even if it's true !)'
The show his year  was blighted by the change of date for Colours' wargame show from Sunday to Saturday, for whatever reason (the stars were probably not "right"). The effects were immediately apparent in the vast swathes of space left, that would normally be filled with the familiar faces of well-known traders, Colonel Bill's and Dave Thomas to name the ones that stood out in my mind.
There was however the appearance of  "Irregular Miniatures", probably my  most frequently visited trader over the years and the reason I'm not a millionaire.
I also thought that footfall was down on previous years, but at least one could get the full attention of the traders without queueing !
So, here's the obligatory pics:
The Barbarossa game was put on by Tyneside Wargames club, looking more like a large boardgame than the traditional wargame, but none-the-worse for it ! In the picture below that's St. Petersburg in the top centre with Moscow off to the right, whilst just behind the centre-front lines is Kiev (probably).
The (almost obligatory) Napoleonic game of Derlon's attack at Waterloo featured a 'huge' La Haye Saint and lot of well-painted 28mms. Even though it did look very good, it did look a bit wrong to me and I haven't a clue why !
As usual apologies for the quality of the photographs and their dearth, but you just can;t get the staff these days !
I think I've covered all the games (yep, there that few!) and I'm pretty sure Blyth Wargamers put on one of the Air war games, but I'm not sure which one !
Here's a couple of pics of the hall at approximately 11.30 am.:
For all its apparent shortfalls, the show was still a good day out, the games were generally very good, the traders were happier than ever to take our money and I met with many old pals (one I played games with in the early 70's and haven't seen at  show for about 20 years).
Mistaking Ian Kay Junior (Irregular minis), for the man himself was amusing and embarrassing in equal measure (I'm old, leave me alone).
Oh, I also spent all my saved pocket money for this year (and a lot of next year's too !)

Thanks to my friend (and chauffeur for the day) reading and finding various packs of figures I came away with : 3 Packs of North Star animals (Warthogs, Wildebeests and a Cape Buffalo); a pack of Perry Amazonian Adventures,  and 3 camels and riders. The latter finished a unit of 12 Irregular Camels; I'd bought the first lot about 2003 and they only had 9 then !
There was only a single trader selling anything like a range of paint (thank you Warlord) and I bought two Vallejo bottles of White - not, snow, off, mummy, bone, ghost or any other type , just white  !

Not for me, but as a birthday present for #1 son I got the following:
I reasoned they'll need some support weapons too so got three packs - a FOO, a medium mortar (81mm) and an HMG 34/42.
On reflection I'm probably lucky that more traders were not there as Perry miniatures are becoming more and more attractive to my needs and wants.

Over the last week, I've continued to be busy with this painting malarkey (can't see it catching on though), finished some models, and based up more ready to underfcoat (including three camels).
I'll probably post the finished stuff next week, providing I have sufficient time this week as RL once more interupts with an unexpected clinic visit and a regular hospital visit to take in , along wiht my renewed Granddad duties of school collections! (the latter is a joy rather than a chore btw).

That's it then for another week and of course if anything has been of interest then it's been worth while and as always your comments are both welcomed and appreciated.