As commented upon in my last blog setting up a game of Pirates versus Zombies can't be ruled out, there is after all the zombie/undead types in Pirates of the Caribbean. Whilst I doubt though that I'll ever go down that path I nevertheless came across a miniature in my last batch of zombies from Zombiesmith that would fit in perfectly as some form of zombie Pirate.
You can just about see him on the deck of the first pirate ship I attempted (and very nearly finished). The ship is made almost entirely from scrap: plastic, card, filler, dowels, embroidery threads, cotton, bbq skewers, matchsticks,  plastic canvas and of course tapers/spills (nowadays I'd use coffee stirrers of course). The original cannon was scratch built in wood (barrels), thick card (carriage) and dowel (wheels). I then cast then all in a lead/tin mix.Up close they're fairly ropey, but they do the job. 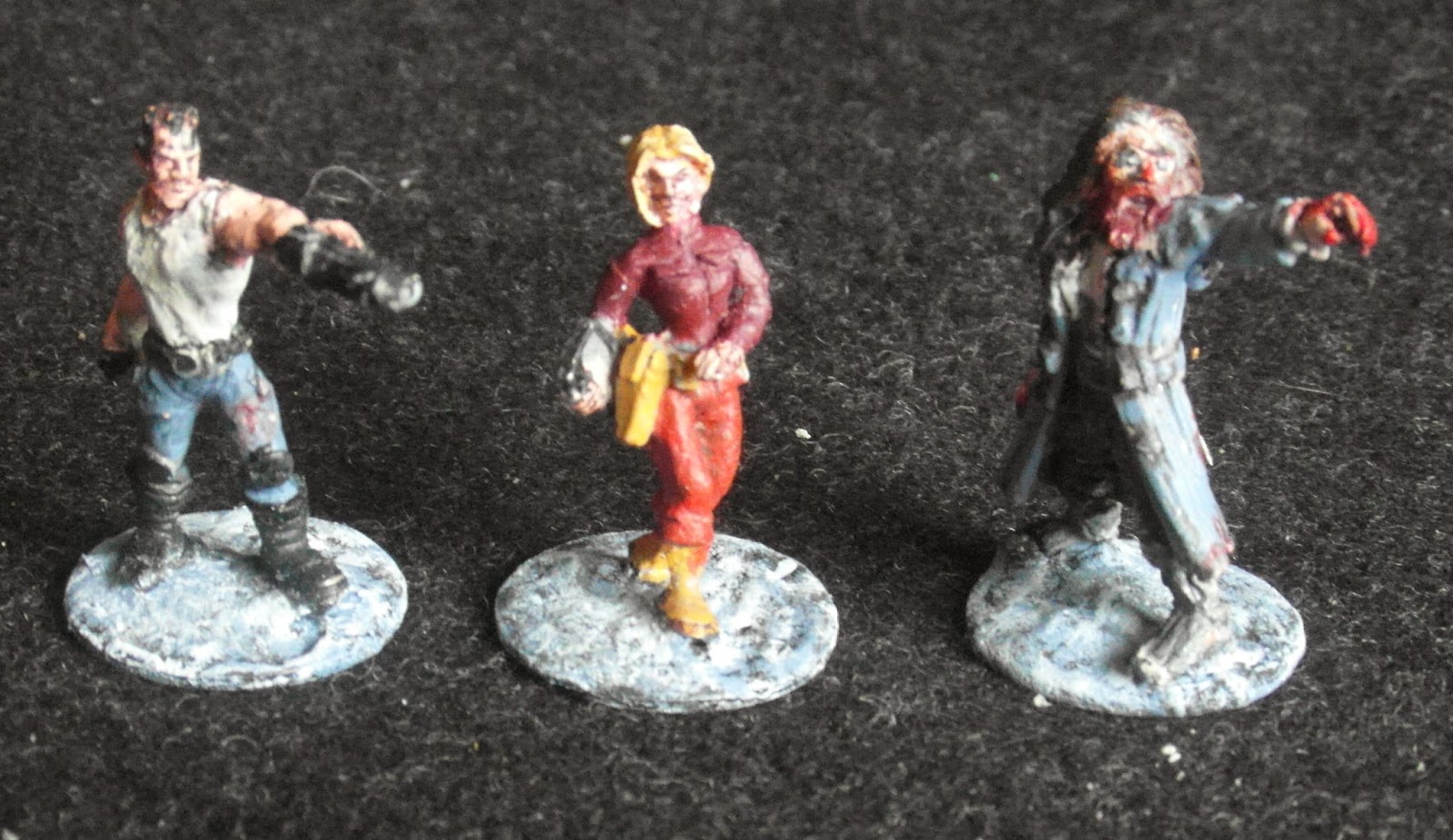 Here's the pirate looking type with another two randoms. The girl I've just found out from Colgar6's blog is a heresy miniature whilst the Schwartzenegger wannabe's origins are still a mystery to me.
The "pirate" zombie could just as easily have been painted as a survivor, although his clothing would suggest he has no modern dress sense and is very tattered - he'd make a good tramp though! 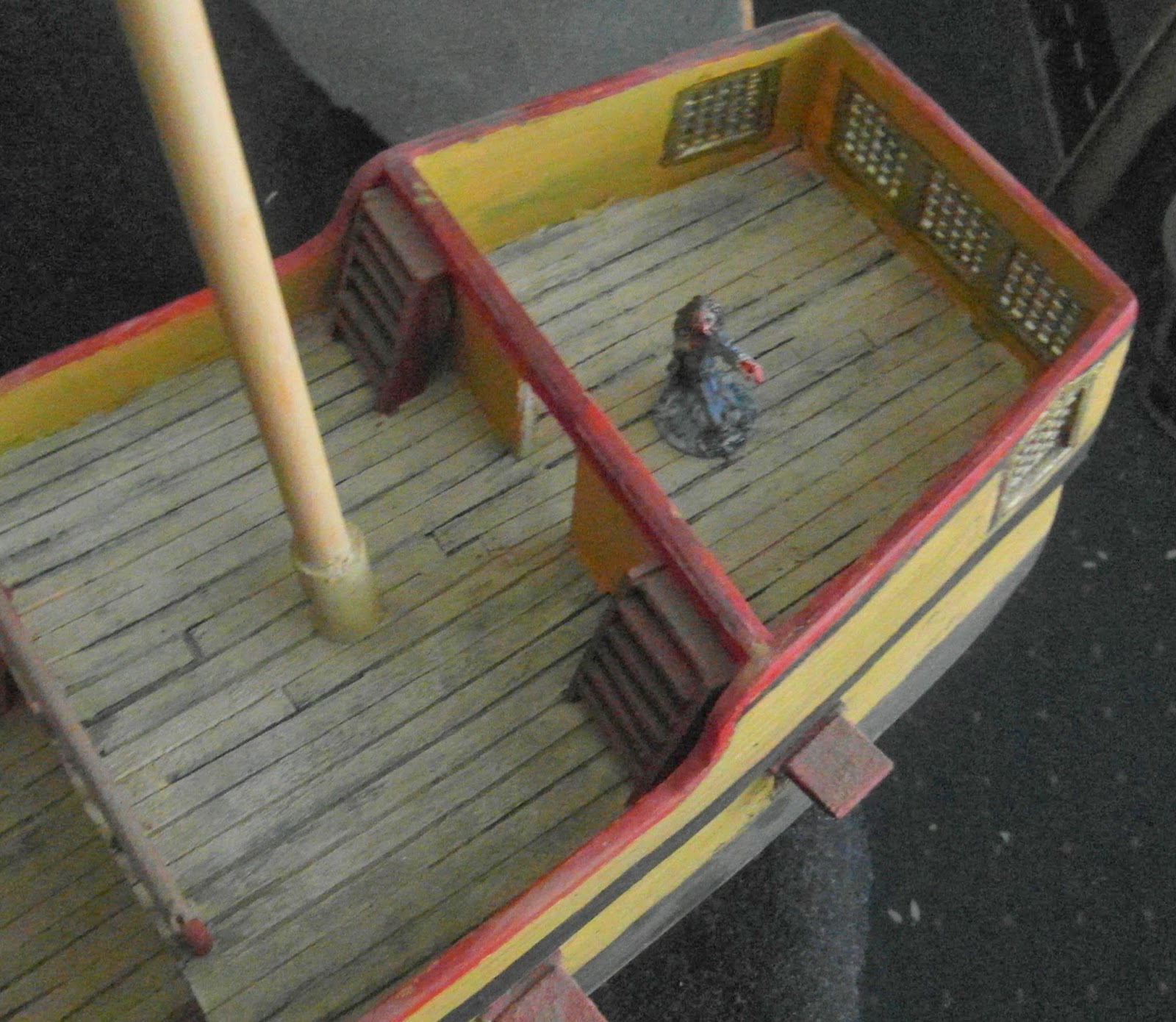 The blunt end of the ship has a lift off deck above (where the steering wheel is (see - I know all the right naval terms) and is really nothing spectacular, but you can see the plastic canvas windows, so this is probably the captain's room.
On the rear mast base you can also see a collar around the mast, this gave a little more support to the mast (which is embedded in the deck) and a little more glueing surface.
The front end upper deck is also removable, but it's just an empty space inside.

The figures here, survivors and their zombie counterparts, are like the majority of this batch are Zombiesmith minis.
The woman could obviously be used in a pirate scenario whilst the guy would just need his hat filing off as the rifle he carries could easily be taken for a flintlock type weapon.

The Zombiesmith clergyman may just get away with being used in a piratical setting though I'd be happier using him if the bottom part of his trousers were filed to breeches' length.
The other two are a "Zombie me" finally based up (a present) and a Mega Mini "zombie" child hockey player, though I'm going to use him as a child survivor as there's so little obvious damage to him. 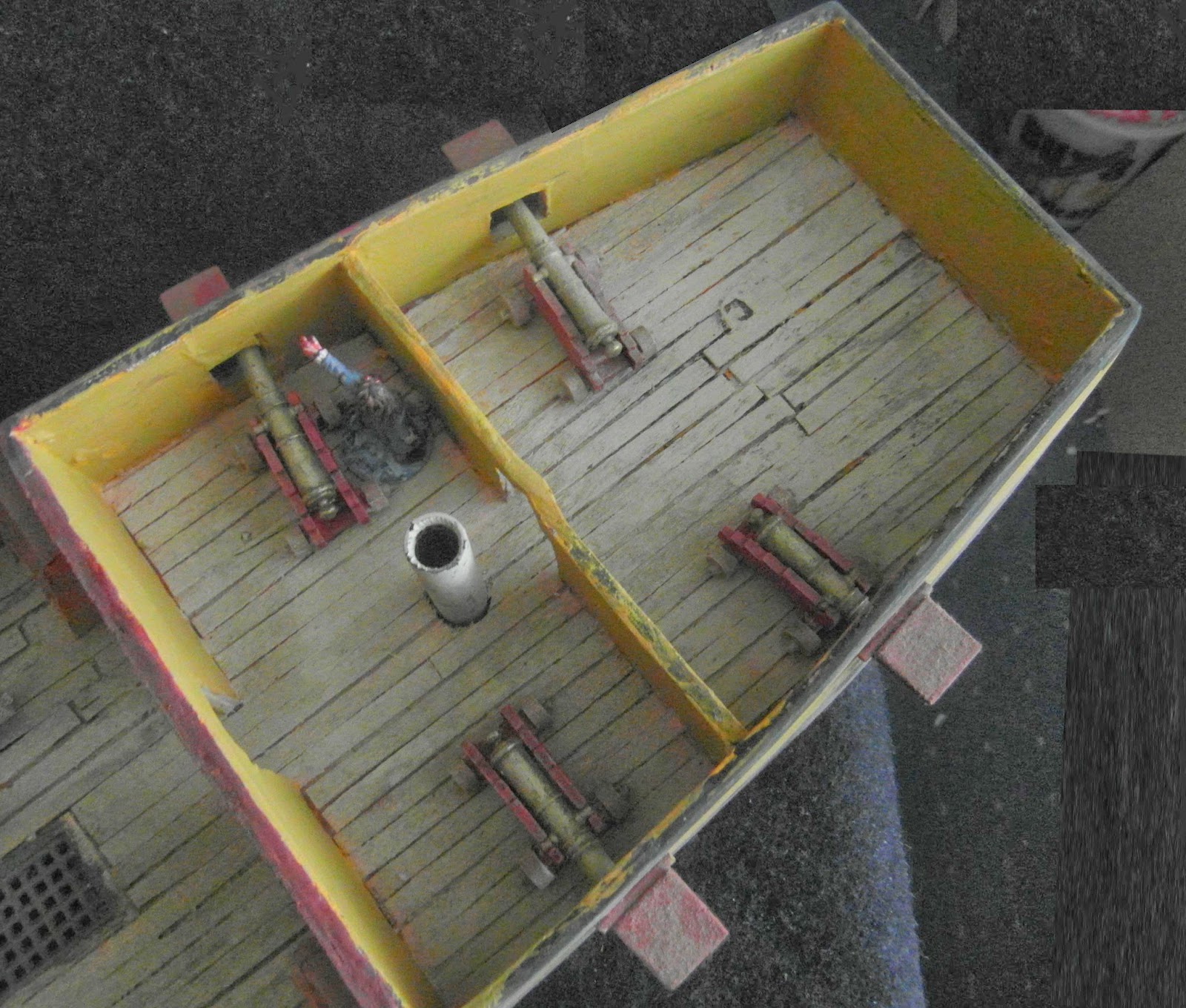 The bottom deck back end rooms and guns.
(I haven't a clue now why I split it into two areas)
The tube in the centre of the photograph is a piece of plastic and the mast in the deck above slots nicely into it making the deck above much more stable.
For such a large model I determined that as my Pirates were all based on 20mm squares I needed sufficient space to get at least one crewman on either side of the cannon and one at the rear and I still had to leave a gap for another figure to get between the two rows of guns.

There are a lot of zombie firues that could easily pass as pirates, with or without a little filing and creative painting. Two out the five shown here are probably beyond redemption but the other three could be easily used. The chap wielding the spade originally had a road sign, which  didn't fit any USA sign I could find (it was to all intents upside down). 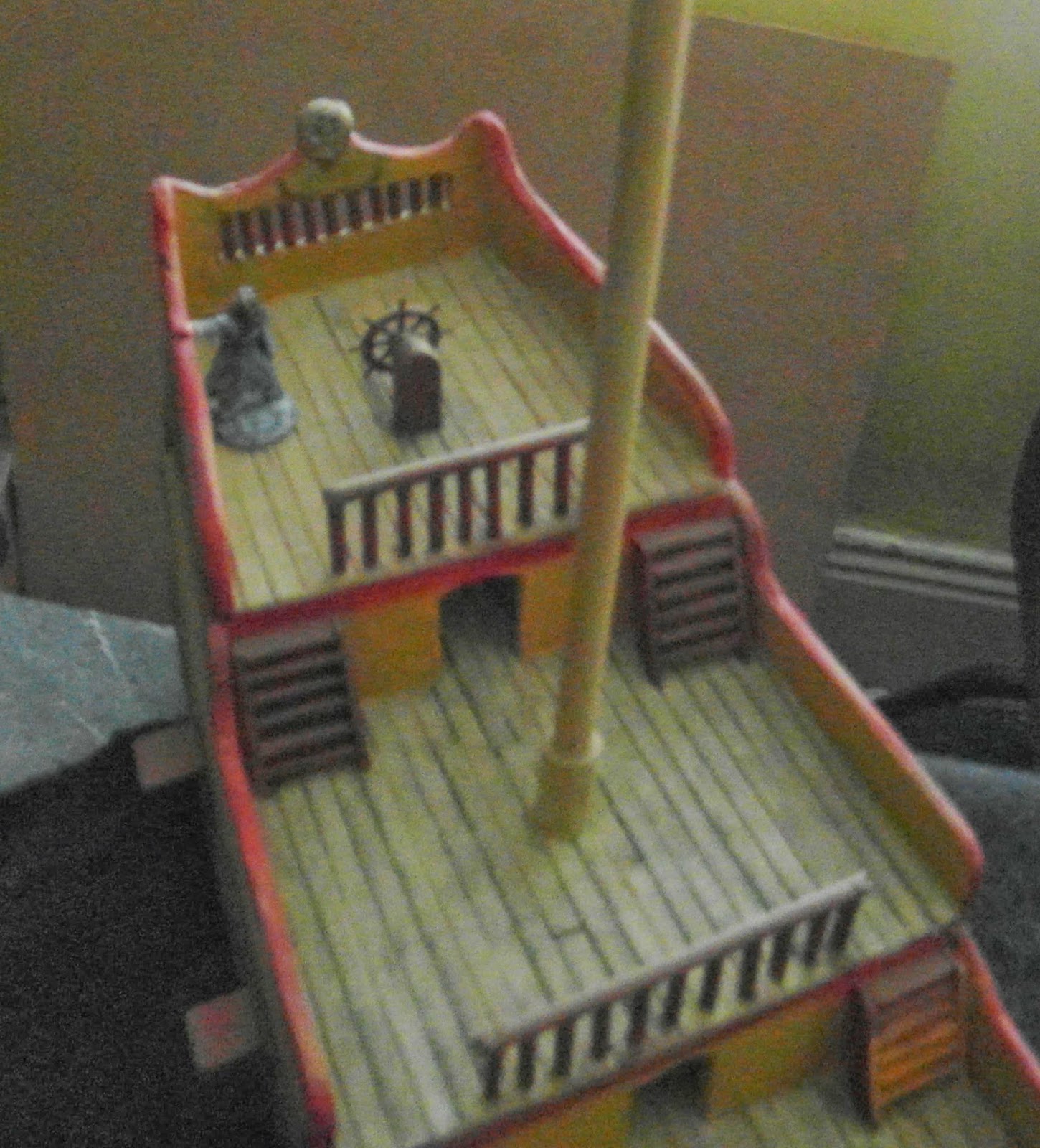 The steering wheel at the back was the only bit I bought specifically for this model from those very nice chaps Ian and Ron at Irregular miniatures (I think I bought several of these along with many of their pirates).
The railings are all bbq skewers for the uprights but the tops may well be garden canes.The steps/ladders are scraps of plastic.
This may be the biggest of the three ships I started on, but not by very much .
It has an overall length from back to front of about 24" ans the biggest mast in the middle is about 24".
The fighting/lookout platform has a lip around it to give figures a little more security from their inevitable accidental plunge to the table in play. I think about 5 figures could fit on it .

Above are some more zombies from the Zombiesmith horde set who to one degree or another could be utilised on board. 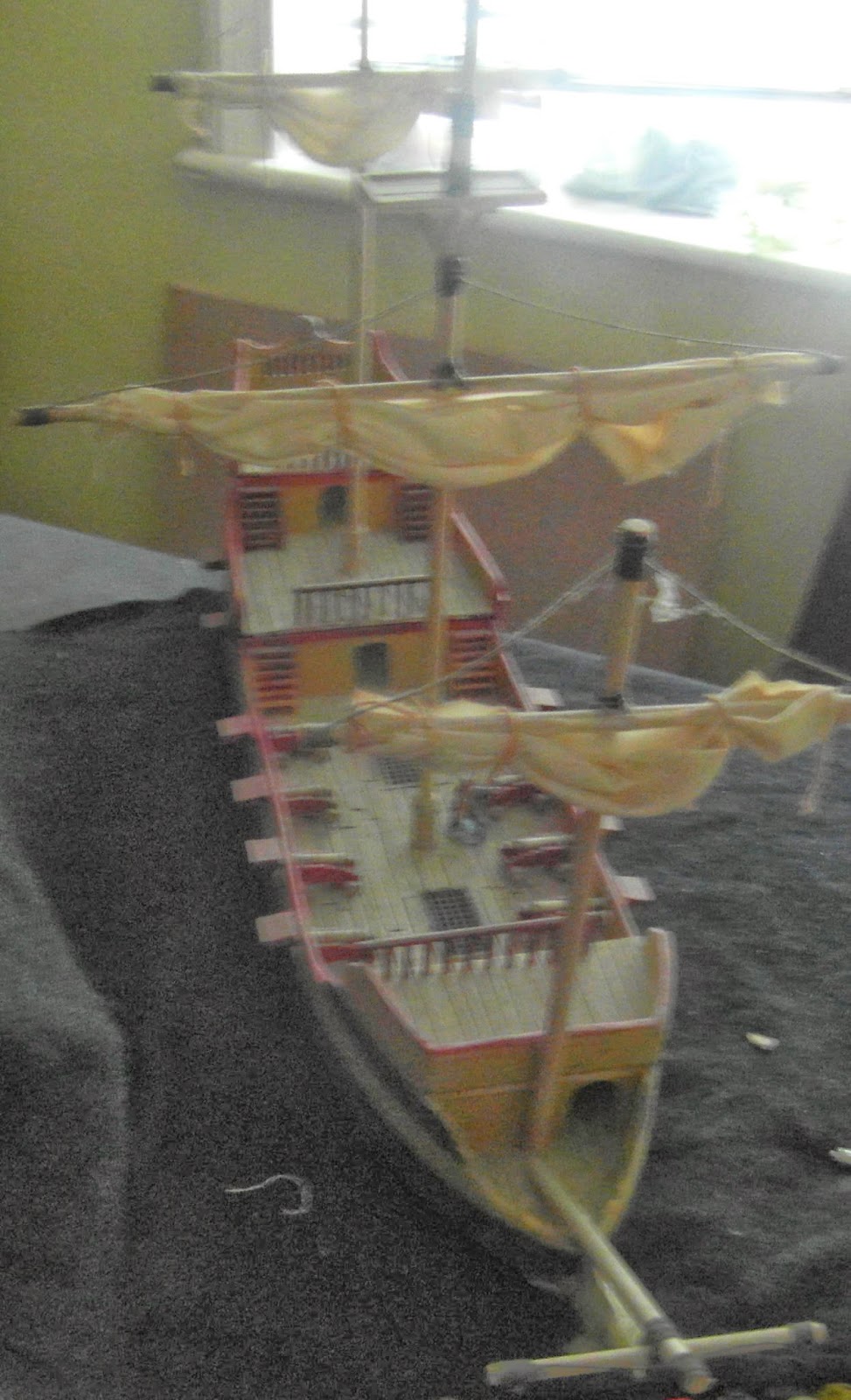 Finally, a group shot of the Zombiesmith horde and the ship.

Whilst I'm sure that out there are already many gamers playing Pirates versus Zombie games and there are probably a shed-load of figures too for suitable zombie pirate figures, but I'll not be looking for them.


That's it then for another week and as always your comments are welcome and much appreciated.